SJD Barcelona Children's Hospital is a pioneer in conducting research and implementing new technologies using 3D printing. There, 3D printed anatomical models are used to plan and simulate around 200 operations per year. Using the BCN3D Epsilon W50 and Sigmax printers, they 3D printed biomodels and implants that were helpful in an operation involving complete tumor resection in a young patient.

Regardless of the degree of difficulty of a given operation, each one carries a potential risk of complications or postoperative complications. At SJD Barcelona Children's Hospital, 3D printing helps meet pediatric and obstetric needs in around 200 operations per year. This time, we will discuss a specific case in which the biomodel was used to both plan and perform surgery in an oncological patient. Let us trace the case from the radiologist's first impression to the patient's own result.

Number 3 for activity in Europe and number 1 for pediatric activity in Spain - SJD Barcelona Children's Hospital is a university hospital that grows through research and implementation of innovative solutions. The corridors of the hospital are covered with animal-themed patterns, interactive songs and live music flowing through the reception desk are designed to provide patients with the greatest possible peace and comfort.

Planning and 3D printing went to the hospital in 2013 after Dr. Lucas Krauel asked for the creation of a biomodel to help him plan the treatment of a complicated case of a cancer patient. This contributed to the creation of a multidisciplinary group that was expanding its activities and at the moment, SJD Barcelona Children's Hospital has already planned over 200 operations and has 9 different specialties using 3D printing technology.

The 3D unit of the SJD Barcelona Children's Hospital, 3DForHealth (3D4H), was officially established in 2016 thanks to the work of radiologists, surgeons, engineers, and financial and simulation experts. By enabling 3D planning, virtual simulation, the creation of 3D printed anatomical models or custom implants required for complex surgeries, it meets the needs of all pediatric specialties. The hospital's activities cover a broad education base, research and development projects for new devices, development of simulators for specific needs and much more.

The present case concerns a patient who had already undergone surgery, as a result of which his left eye was removed. Due to the patient's predisposition to develop other tumors, and despite the 3-month rounds of radiotherapy and chemotherapy, the tumor remained concentrated in the right jaw bone. Since chemotherapy is not as effective in this type of cancer, it was necessary to perform a complete resection.

Of course, in complex surgery like this, there are a few key factors to consider. First, the affected area was the face, obviously an important part of the patient's identity. Secondly, the patient is a growing child, so the team had to consider the next stages of skeletal development in the future. Finally, the fact that the left eye was removed meant that the right eye had to be sighted.

The way to resection

As part of the collaboration of all specialties, especially oncology and maxillofacial surgery, the process began with radiologists using imaging techniques (CT and MRI) to perform tests. This was to ensure the best possible diagnosis of a given case. The results were then juxtaposed with existing information on this type of cancer. This stage was not only crucial for case assessment and prediction, but also played a role in planning the aesthetic side of the surgery.

Then, a team of radiologists, surgeons, and 3D printing engineers came together to decide which aspects to print. The selected segmentation was created in the CAD file and 3D planning and simulation started. It was decided that it would be best to print different parts of the skull and the tumor itself. Prototypes of the titanium plates that were to be inserted during the operation were also printed.

The SJD team chose the BCN3D printers for their exceptionally realistic printing results in a given price category.

One of the most popular materials in 3D printing, BASF ABS, was chosen to recreate the color and anatomy of the bones. The printed biomodels served not only as visual aids, depicting the anatomical relationship between the tumor and the cranial regions. The 3D printed parts allowed doctors to verify whether the implants would fit the patient's case. They also helped to simulate the operation itself, define the boundaries of the incisions and allow them to be practiced earlier, which gave a reference point and at the same time strengthened the confidence of the surgeons performing the operation.

3D printing helped to avoid possible postoperative complications and improved the comfort and quality of the surgery performed in relation to both the patient and the entire surgical process.

The efficient course of this operation and the reflection of the patient's experience is a testament to the team at the SJD Hospital. 3D printing is a key player in the development of medical models that are becoming more and more accurate. The 3DForHealth laboratory, based on the use of new technologies, creates tools that enable the pursuit of a better imitation of living tissues by studying mechanical properties, colors and textures. It is clear that 3D printing has and will have a huge impact on the way we view medicine.

The GLOBAL 3D company - as an authorized distributor and service center of the BCN3D brand in Poland, offers professional advice on the possibility of using 3D printing technology in medical applications on BCN3D machines. 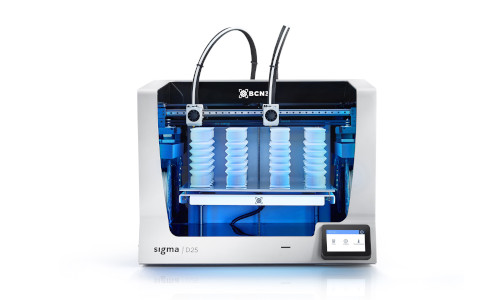